Fund Managers with £424 million to invest, should you: Invest now in Solar Parks OR invest in Advanced Nuclear Power Plants in 5 years time????

£424 million of capital investment will be going into Cleve Hill Solar Park if the decision to go ahead is given; it is expected within weeks.

This is Cleve Hill Solar Park 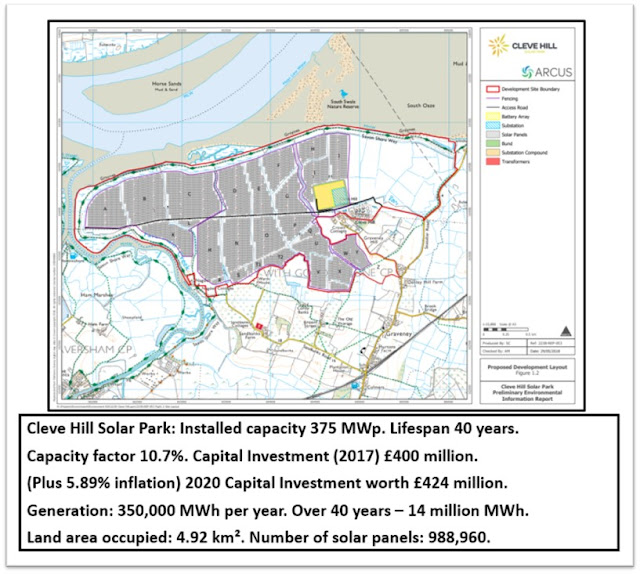 
One of the first Advanced Nuclear Power Plants (NPPs), the BWRX-300 Small Modular Reactor (SMR) will commence operation in 2027 and should become available in the UK by 2030 requiring a capital investment of £587 million (2020). 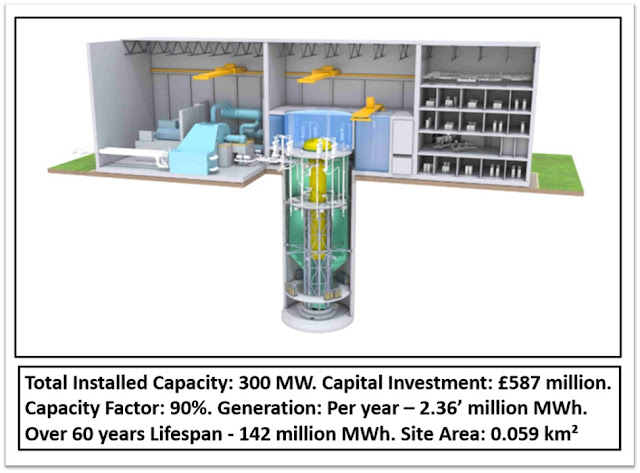 The most significant factor investors should consider about advanced SMRs is their build programmes are now down to 2 years - no different to Solar PV or Wind Farm projects. So the cost-of-capital burden that has drained investment from conventional npps is utterly negated. Comparing investments, it need not be considered a part of 'Significant Costs'.

Thinking in terms of a Wholesale Electricity Price of £50.00/MWh, by 2063, after a 40 years lifespan of economical operation, Cleve Hill will have generated an income of £700.0 million, with significant costs of £564.9  million. That's a potential for dividend payments from earnings of £135.1 million.
Working out at £0.29 for every £1.00 of capital invested.

Meanwhile, it is reasonable to assume the Pension Fund Manager holding onto his £424 million until 2030 would probably have partaken of 'opportunity earnings'. Then by 2030, the £424 million invested in advanced npps starts earning on the Wholesale Market.

Again,thinking in terms of a Wholesale Electricity Price of £50.00/MWh, by 2063, after 33 years of operation, the 72% portion of the BWRX-300 generation will have raised an income of £2.82 billion, with significant costs of £1.65 billion. That's a potential for dividend payments from earnings of £1.17 billion.

But it will carry on for another 27 years of economical operation to reach £2.13 billion 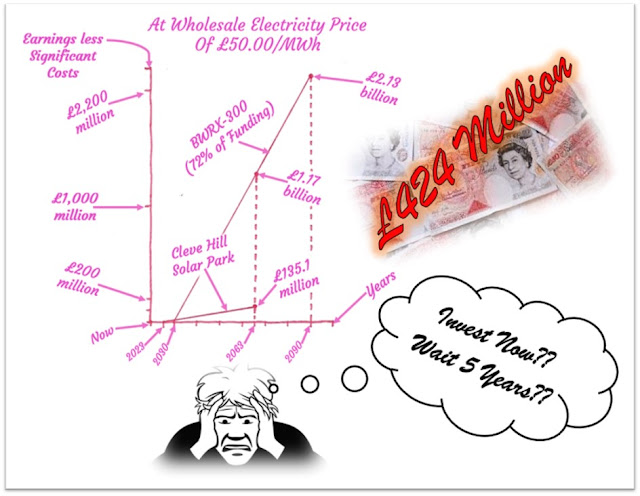 DO NOT INVEST IN SOLAR PARKS NOW - KEEP YOUR PENSION FUNDS SAFE FOR
ANOTHER 5 YEARS AND INVEST IN ADVANCED NUCLEAR POWER PLANTS!
- May 17, 2020

Power to the People said...

Thank you for this succinct but at the same time thorough economic presentation. It pains me to think that this analysis may not be read by the very people who most need to read (and understand) it.

It is clear that you constrained this to an economic comparison.

I think it is important to point out that while you held to the lifetime comparison of the two energy sources, the equivalency ends at those annualized totals.

The nuclear plant will have operated as a baseload generator (no, that's not a dirty word) delivering power for hospitals and other functions critical to civilization throughout every day and night of its operation. The solar farm reliably would NOT produce power at night. That is the most reliable part of its operation.

So, the cost comparison is valid, but I want to emphasize the fact that the solar investment leaves a gaping hole, one that must be filled with a parallel investment in a supplemental power source to feed the grid the power solar cannot provide more than 50% of the time.

So, to your point, the solar investment is not only poor from the investor's point of view, but it is much worse from a social benefit point of view.

Simplistically, I'm of the opinion that it is of no importance to confirm the aspects you raise to the general public, politicians or investors. My 'programme' is to point out to investors the 'error of their ways' by totally ignoring burgeoning developments in advanced nuclear power plants.

I'm basing my efforts on the hope that investors will plough into advanced nuclear and withdraw from renewables (certainly in developed nations). Then the politics will follow the money; the 99.9% (or even 99.99%) of the indifferent general public will be told "you're getting nuclear" and they won't care two hoots as long as it's there at the flick of a switch and at the pumps 24/7/365.

My previous blogpost compared the £9 billion of capital investment going into Dogger Bank Windfarm and the final figure was 12X the potential earnings from the BWRX-300.

I'm going to do it next for onshore wind, usinf Whitelee Windfarm and then one for solar pv in Australia or California, to prove that even with cfs of 30%, it's still a ridiculous investment.

Do you have any blogposts yet to have a look at? I searched and couldn't find anything.

Power to the People said...

I think you are wise to narrow your focus selectively like this. It allows you to present your case to an audience interested in one aspect of power generation.

I am not actively blogging, but keenly interested in power, civilization and the environment. I would love to find a way to bring your message to a wider audience.