Fund Managers with £320 million to invest, should you: Invest now in Onshore Wind OR invest in Advanced Nuclear Power Plants in 5 years time????

£320 million of capital investment is going into South Kyle Onshore Windfarm right now. The first electricity generated will be in Q1, 2023.

This is South Kyle Windfarm:
One of the first Advanced Nuclear Power Plants (NPPs), the BWRX-300 Small Modular Reactor (SMR) will commence operation in 2027 and should become available in the UK by 2030. 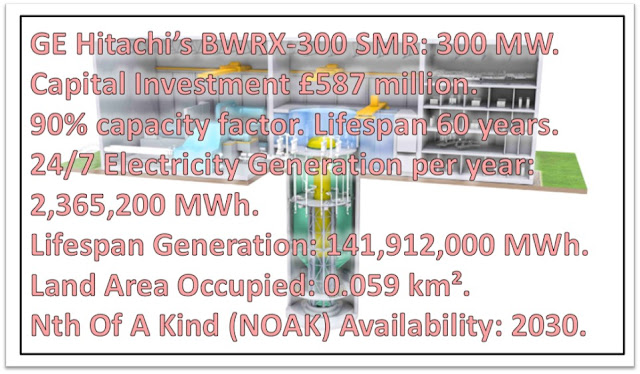 
The most significant factor investors should consider about advanced SMRs is their build programmes are now down to 2 years - no different to an offshore wind farm. So the cost-of-capital burden that has drained investment from conventional npps is utterly negated. Comparing investments, it need not be considered a part of 'Significant Costs'.

For the South Kyle Windfarm investment, assuming the full 15,768,000 MWh are generated by 2048, the first significant cost is a capital investment content of: £20.29/MWh.
The second significant cost is O&M. As the International Renewable Energy Agency (IRENA) puts it: "...O&M data is not consistently reported, making comparisons difficult...": 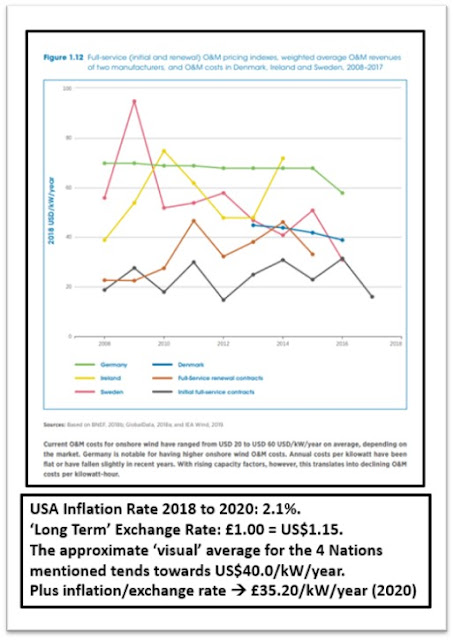 Fuel, as is stated frequently, is 'free energy'. The third significant cost is a fuel content of : £0.00/MWh.

Decommissioning cost data for the UK is non-existent. A detailed 2017 report on a USA onshore windfarm works out at $155,613/MW of installed capacity. Add in USA inflation of 4.6% and the 'long term' exchange rate of £1.00 = US$1.15 and the cost for South Kyle is £34.0 million.The fourth and final significant cost is a decommissioning content of £2.16/MWh.

A capital investment of £320 million in an Advanced NPP like the BWRX-300, would secure earnings from 164 MW of the 300 MW installed capacity. That would generate 1,289,376 MWh per year, and 77.36 million MWh over the 60 years lifespan. The first significant cost is a capital investment content of: £4.14/MWh.

It is then possible to ascertain all of the remaining costs: Fuel fabrication; O&M; waste fund; decommissioning fund - from an analysis of Hinkley Point C npp. All of these costs add up to €23.00/MWh in 2018, requiring factoring in the 2018 € to £ exchange rate and UK inflation to 2020. The remaining significant cost is a 'balancing' investment content of £25.10/MWh

So what does that mean for the pension pots that have gone into the £320 million offshore wind farm, commencing generation in 2023 and earning for every MWh sold at the going Wholesale Price.

Thinking in terms of a Wholesale Electricity Price of £50.00/MWh, by 2048, after its 25 years lifespan of economical operation, South Kyle will have generated an income of £788.4 million, with significant costs of £565.2 million. That's a potential for dividend payments from earnings of £223.3 million.

Meanwhile, it is reasonable to assume the Pension Fund Manager holding onto his £320 million until 2030 would probably have partaken of 'opportunity earnings'. Then by 2030, the £320 million invested in advanced npps starts earning on the Wholesale Market.

Again, thinking in terms of a Wholesale Electricity Price of £50.00/MWh, by 2048, after 18 years of operation, the proportion of the BWRX-300 npp in which the £320 million of capital was invested, will have generated an income of £1.16 billion, with significant costs of £584.2 million. That's a potential for dividend payments from earnings of £481.8 million.

But it will carry on for another 42 years of economical operation to reach £1.606 billion. 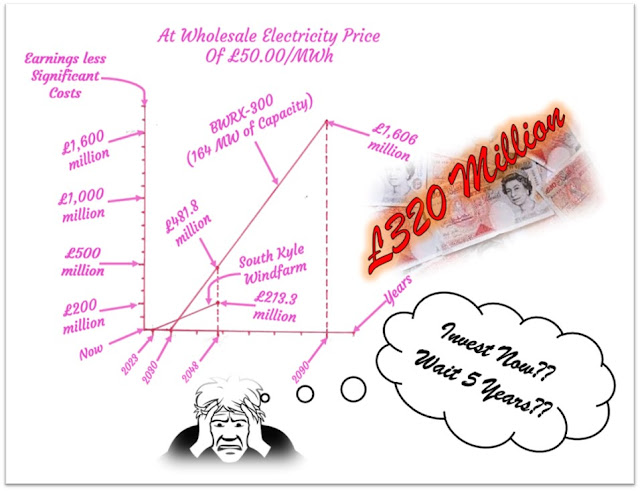 DO NOT INVEST IN ONSHORE WIND NOW - KEEP YOUR PENSION FUNDS SAFE FOR ANOTHER
5 YEARS AND INVEST IN
ADVANCED NUCLEAR POWER PLANTS!